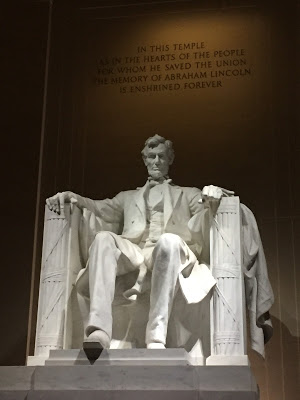 Completed in 1922, this memorial in Washington D.C. is dedicated to former President Abraham Lincoln who presided over the Union during the American Civil War and abolished slavery in the country. The site has been the location of a significant number of historic national events, one of the most famous being Martin Luther King Jr.'s "I Have a Dream" speech during the March on Washington for Jobs and Freedom in 1963.

The monument is located on the far west end of the National Mall and faces the reflecting pool with the Vietnam and Korean War Memorials on either side of the monument. Behind the Monument is the Potomac River and some walking paths.

Inside the memorial, there is a nineteen-foot tall statue of Abraham Lincoln contemplating in a chair. Behind the statue is an inscription of "In this temple as in the hearts of the people for whom he saved the union the memory of Abraham Lincolnis enshrined forever." Lincoln's hands spell out "A" and "L" in American Sign Language; however, it is unconfirmed if this was purposeful or simply coincidence.

Additionally, on the walls of the memorial the Gettysburg Address and his Second Inaugural Address are inscribed. It is fascinating to take the time to read these inscriptions as both are some of the most notable and nation-defining speeches in the United States' history.

The Memorial is one of the most iconic buildings in Washington D.C. and the United States. Many films use the site as locations to depict American patriotism and the American spirit or to convey the location of Washington, DC. Additionally, the monument is a stark symbol of race relations and the timultous past and current issues facing social inequality. It can also be found on the back of the five-dollar note, Abraham Lincoln's portrait is on the front.

Since the memorial is open 24/7, at night it is relatively free from the crowds and tour groups that plague the national monuments during the daytime. In addition to not being congested, the night also provides cooler temperatures in the summer months to escape the oppresive heat. The atmosphere at night can create a unique experience when visiting the monuments as they are lit up and strikingly pretty in the dark surroundings.

How to spend a day at the Ponce Inlet Lighthouse

White House: Past, Present & How to Visit